On September 11, 2001, after losing what was left of my breakfast in the Boston Phoenix ladies’ room, I passed Clif Garboden on the way back to my desk. Seeing my pallor, he reminded me in his gruff yet reassuring way, “the Sun’s going to come up tomorrow.”

I hadn’t been with the paper for very long, but it was a life perspective I’d come to expect from Clif who, from his time as a young journalist in the early days of the alternative press, had seen his share of crises, both in the world and in the newsroom. There, presiding from his outward-facing desk, he was the captain, with a sailor’s vocabulary and a get-it-done attitude no matter the situation, stormy or calm.

I like to think I’ve emulated these qualities in the jobs I’ve taken since my time at the Phoenix, persevering through tough projects with stoicism and toning down the profanity only when I realized that museum culture is a bit different from that of journalism. 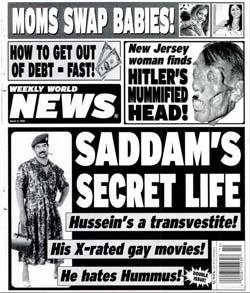 I hope that my coworkers know that when I drop comic printouts around the office or forward a well-timed link, I tip my hat to Clif, who was quick with a bleedingly current photocopy (like the one here, which he wordlessly dropped on my desk shortly after the Iraq war began) and more recently, emails with news links that perfectly tapped our senses of outrage or humor. Living so close to the news like all editors do, Clif easily found the snarky underbelly when things turned particularly absurd, and nothing was off limits.

On Friday, as another Big Story bubbled over in Egypt, I received word that Clif had passed away. A flood of sorrowful tweets, status updates, and blog postings have quickly followed, and more will surely come. It’s a testament to a great boss and editor who managed to make hundreds of colleagues feel his sincere concern and enthusiasm for their continued well being, personally and professionally. We’ll miss you, Clif.
“We Never Got Rich, But We Are Going To Heaven: Farewell, Clif Garboden (1948-2011)” PHLOG, February 11, 2011
“Off the press! My life and good times in alternative journalism” Boston Phoenix, November 15, 2006