Space Shuttle launches were local news for those of us who grew up in Florida. As a grade school student, I barely understood the gravity of the Challenger disaster, only that a teacher was on board, making it doubly sad. We watched Discovery‘s debut — and the space program’s triumphant return — on a fuzzy 12″ tube TV in 5th grade math class. Our teacher, a former nun, said quietly, “if it’s your inclination to pray, now would be the time,” as the shuttle was about to lift off.

Then, we ran out of the classroom and into the brilliant sunshine, catching a glimpse of the bright-white object in the sky just as it disappeared into the stratosphere. We could only imagine what it was like for our parents to witness the Moon landing, but this was the space flight we knew — inspiring and mind expanding, and today — for the time being, anyway — over. 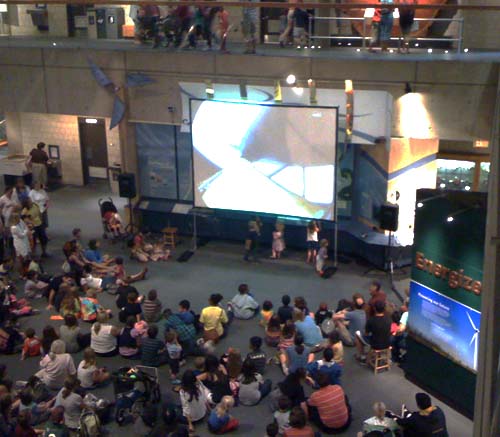 During today’s launch, surrounded by kids who, like me, do not know a world without the shuttle, I realized maybe it is time to retire a program that’s nearly as old as I am. Sigh. For now, I’ll get by with Battlestar Galactica on Netflix streaming, dreaming of the day when “spool up the FTL drive” becomes part of real-life space vernacular.