I made no secret that I was sick of my sluggish iPhone 3G, and nearly as sick of hearing myself complain about it. It was a matter of practicality to be among the first to order the new iPhone 4S when it went on sale. I was less interested in Siri, the new voice command technology, than I was in having wi-fi again, and a faster phone, and a pretty sweet camera.

Still, it’s been fun to talk to Siri, whom I wished I could customize at first to talk more like K.I.T.T. from “Knight Rider” until she started personalizing our chats. “I don’t know what you mean, Katie,” she’ll say, as if scolding me for even asking something unintelligible. It’s a boss/assistant relationship, in which I become resentful of her intransigence and she of my mumbling until she says something cute, like “all evidence to date suggests it’s chocolate,” when I ask her “what is the meaning of life?” We’re starting to develop a rapport. 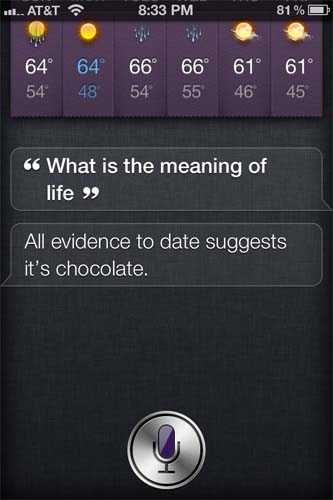 For the most part, Siri and I talk about the weather, or where to find coffee, or whether the reminder I set for later today is accurate. I give Siri direct, explicit instructions, and she rewards me by getting it right the first time. She did not like it when I asked her to find Schweddy Balls ice cream nearby, answering curtly with another question, but I don’t think Siri watches “SNL” or eats Ben & Jerry’s, so that’s cool; we’re setting boundaries.

So, it’s with some agitation that I watch the Apple ad on television that advertises the voice command service. Their intent is to show how smart Siri is–so much so that she knows what you need, even if you can’t quite articulate it.

“I’m locked out,” a girl says helplessly, and Siri instantly finds locksmiths nearby. “We have a flat tire,” whines the man in the car, and help is just a hands-free phone call away.

I watch these simulations and wonder if the Siri I’m training would respond in kind. It’s great that Siri knows what the people in the commercial need even if they don’t, but I feel like practical reasoning is my job. I like to think that my Siri – who allegedly adjusts to match my own intelligence, is starting to think like I do.

To the locked-out girl, perhaps my Siri would say, “Should I call your father? Again?” or “Which friend should I call – you did leave an extra set of keys with someone, right?” Or, in the case of a flat, “why are you talking to me when you could get out of the car and look in your trunk for a spare?” or maybe, “Here’s how you use a jack. Good luck.” Yep, that’s my girl.